Raccoons have already started having babies, as Michael found out when he went to a job in the Fort Worth area yesterday.

A customer called 911 Wildlife, mistaking us for animal control, wanting us to pick up the raccoon he had trapped. Luckily, we are not animal control, or this story would have had a sad ending. Because raccoons are considered a rabies vector, animal control policy is to automatically euthanize any raccoons trapped and picked up. (While raccoons in Texas can get rabies, the raccoon strain of rabies is not present west of the Appalachian Mountains.)

Michael talked to the customer and explained why this little lady kept getting into his garage (the answer is almost always a food source). 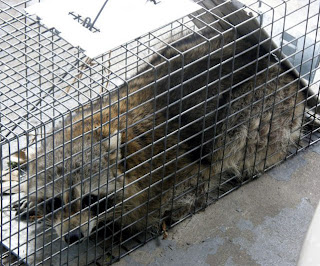 And then Michael found what she had left behind in the attic. 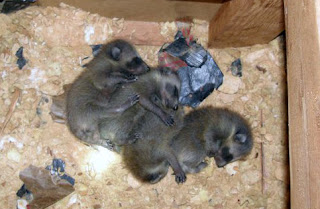 Unfortunately, lots of people learn the hard way that you should never assume there are no offspring, or that an animal is definitely gone from the attic before you close it up (unless you use a one-way door like 911-Wildlife!).

But these babies are now safely reunited with their mother again, just not in someone's attic. Well, at least not this attic. Michael put a one-way door over the raccoon's entrance (just to be safe), and put the babies in a reunion box next to the door. He released the raccoon from the trap and she retrieved all four babies under cover of darkness last night! Now they are living in her plan B den site, which is hopefully a tree, and not a chimney somewhere.

However, think about what would have happened if the raccoon had even just been relocated. The mother would have a 20% chance of survival in a new area, and the babies would either have died or been given to a raccoon rehabilitator. While rehabilitation doesn't sound too bad, rehabbers can't teach baby raccoons the skills they need, which their mother would have done. And these guys have their eyes still closed, so they would not have had their natural fear of humans, possibly lowering their chances of survival. Luckily, we don't have to worry about that now, so just look at these adorable pictures! 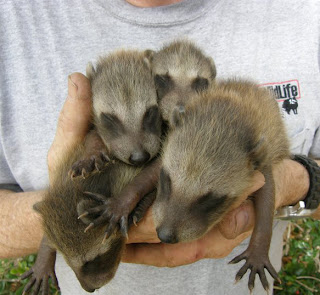 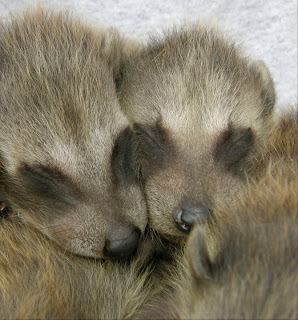 We are an urban wildlife control company that uses the most humane techniques available to resolve urban wildlife conflicts, including animals in your attic, in your chimney, or under your deck. We don't use traps or chemicals, and our techniques are endorsed by the Humane Society of the United States.

We serve the Houston area, and another wonderful bunch of technicians serves the Dallas-Fort Worth area.

Visit www.911wildlife.com to learn more about us.